A Family’s Journey with Epilepsy

by The Special Needs Companies 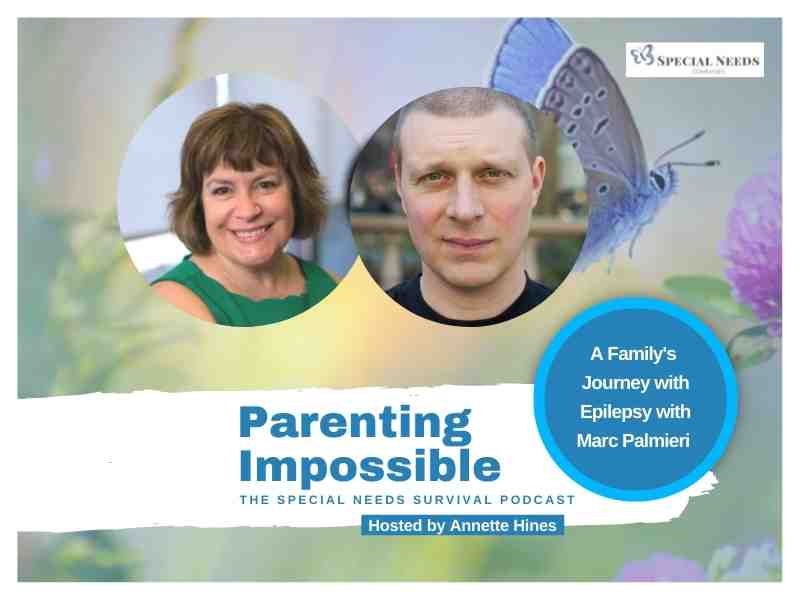 What do you do when your five-month-old child has seizures that are only happening at night?  For Screenwriter Marc Palmieri, it was hard to know whether the strained movements and odd facial expressions were a problem for his young daughter Anna, when she had been a healthy, happy baby otherwise.  During this episode of Parenting Impossible, Host Annette Hines and Palmieri discuss his family’s journey with epilepsy and the difficulties his daughter Anna faced living with severe epilepsy and the mounting challenges as her symptoms worsened at age 11.

The episode starts with Hines and Palmieri chatting about his early life as a baseball player and then going from what he called a total jock to total theater kid in college after watching a performance of Tennessee Williams’ “The Night of the Iguana.”  Ever negotiating the hard and deep questions, Hines asks him about the reader for whom Palmieri wrote his newly released book, SHE DANCED WITH LIGHTNING, My Daughter’s Struggle with Epilepsy and Her Boundless Will To Live.  In response, he says that he wrote the novel with his parents in mind who are such careful readers and observers. It’s clear from his description about his relationship with his parents and his love of talking with them about books and their analyses of literature that they influenced his writing skills.

While describing Anna’s struggle with epilepsy, Palmieri shares many of the questions challenged his family: Why are the seizures only coming at night? or Why were there 4 seizures today, but not yesterday? or When can we try different treatments?  Ultimately, Anna was diagnosed with complex partial seizures frontal lobe epilepsy and was able to live a fairly normal life despite having severe epilepsy until age 11. Early in Anna’s childhood while the seizures were nocturnal, he said that the family was able to put the epilepsy out of their minds for a while because Anna was able to function well during the day despite her exhaustion.  But as she neared age 12, Anna’s freedom from day time seizures ended and the epilepsy hit a spiral with seizure clusters that seemed non-stop and robbed her of her ability to move, speak, or function.  The family’s experience of an adrenaline rush of a nerve-racking, mystery pursuit to save Anna from control of the epilepsy resulted in a serious brain surgery. Listen to the episode to hear more about a family journey with epilepsy and why it is such a terrifying disability.

Marc Palmieri is a playwright who received the New York Times’ Critic’s Pick for his play LEVITTOWN and screenwriter of the Miramax Films “Telling You” (1999).  For 10 years, he served as a faculty member of The City College of New York’s MFA program in Creative Writing, and is now an assistant professor at Mercy College’s School of Liberal Arts.